How I do my computing

As almost every geek, I want to show you my equipment and setup.

Software
I use Debian GNU/Linux as Operating System whenever possible. But some of my servers are based on CentOS, which has a simple historical reason.
See my about page for more nice software that I really like.

Internet and Phones
A pretty normal Fritzbox 7530 do I use as DSL router and telephone system. My fritzbox routes everything to my opnsense installation on an APU3 board.
For my landline I use a rotary phone, which I got from my grandpa. I was pretty suprised that this phone still works on a fritzbox with Voice over IP.
My mobile phone is a Samsung Galaxy S5 without any google services. Most of my apps are installed via f-droid. But I still think this whole android platform is somehow broken.

Workstation
My daily workstation is a Dell XPS 13 9350 notebook from 2015. It has a i5-5200U@2.20GHz and 8 gigs of RAM combined with a nice FHD display. A year ago I switch the broadcom wifi to Intel Wifi 9260. I really love this thing, hopefully I never have to switch to something else.
My second workstation is my good old desktop computer. Many years ago this was my gaming station and it still has one of these badass graphicscard from 2012 (AMD HD7870). But probably the parts are too old now to play recent games. But it’s still a beast when it comes to other tasks.
My third workstation is an Google Pixel C tablet with a bluetooth keyboard. I bought it a few years ago when I was quite a fan of android. Today I’m not really a fan anymore, but it still runs Android LineageOS and it works pretty good.

A few months ago I switched from KDE to i3 on my workstations. Firefox with a bunch of addons is my browser.
Im using mutt for mail reading and khal+khard to manage my calender and contacts. And finally newsboat to read some news and also watch for new videos.

Servers
Im running basically three servers. One as hypervisor with qemu/kvm, one as a dedicated storage server and the third one does all the backups with borg. On the hypervisor I have like 10 virtual machines to run my favorite services. See my services page for example. At night, everything is backed up with borg via my backup server.
Specs:
hypervisor - i5-6500@3.20GHz, 32 gigs of ram and a bunch of hdd’s and ssd’s
storage - i3-10100@3.60GHz, 8GB ram and plenty of storage
backup - T4400@2.20GHz, 2GB ram and 2TB diskspace to store backups

Home Automation
A few years ago I became very obsessed with Home Automation.
My basestation runs on a raspberry pi 3, combined with some usb sticks to connect zwave, zigbee and other protocols.
Recently I also printed a very nice case. 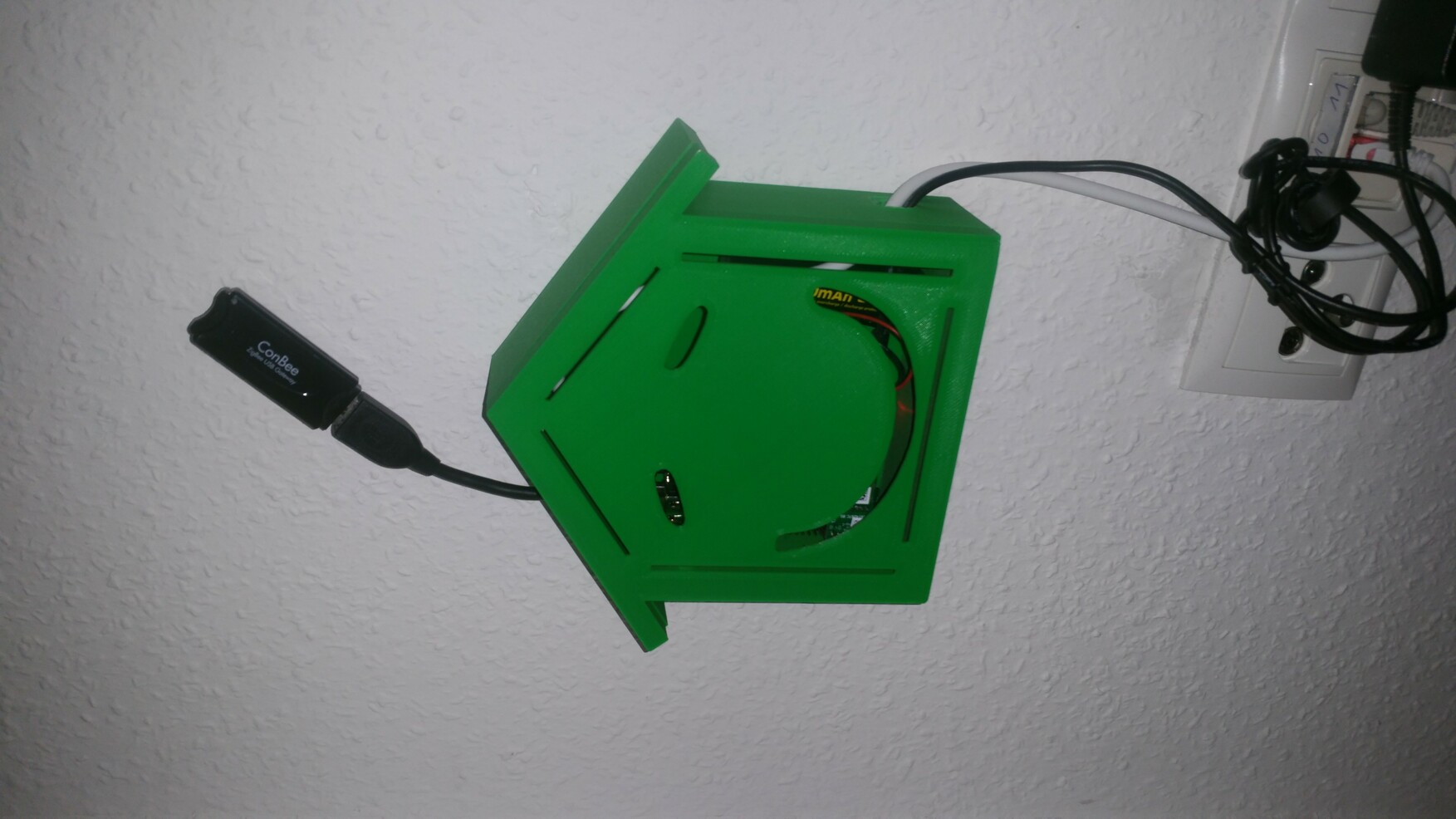 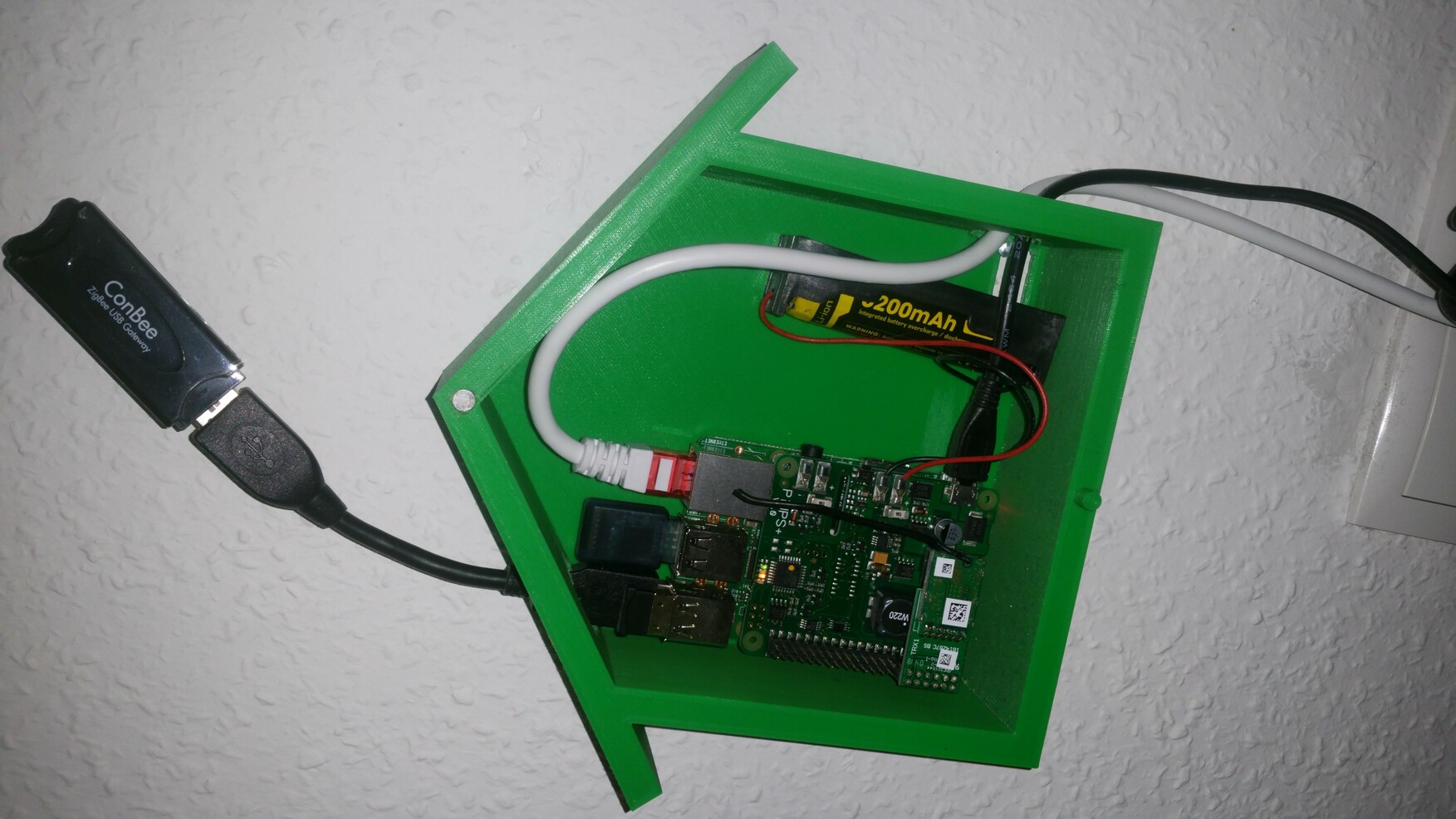 Allotgarden
Last year I put some equipment in my allotgarden. A raspberry pi combined with a usb lte modem. Its also a wifi hotspot, maybe I can use it for some homeoffice action. Probably I will extend the setup over the next months. I tought about some automation in the garden.

History
In 2008 I bought my first notebook, an MSI Wind u100 and I still own it. Back in the days it was really fun to have such a small device in school. But nowadays I dont use it anymore. Mostly the small display combined with the small resolution is just pain. :-D In late 2009 I bought my first server. It was a mini-itx board with an intel atom and 4GB ram. I think I installed windows server on it and later used vmware server to run my first gnu/linux server. Sadly I have no pictures of this thing.

In 2012 I configured my second server where I used ESXi as base OS installed on a usb pendrive. I used it to run a bunch of windows and gnu/linux servers.
I retired this server probably around 2018 because it was located at my dad’s home and he had no use for it. ;-)
The cable management of this thing was pretty bad. 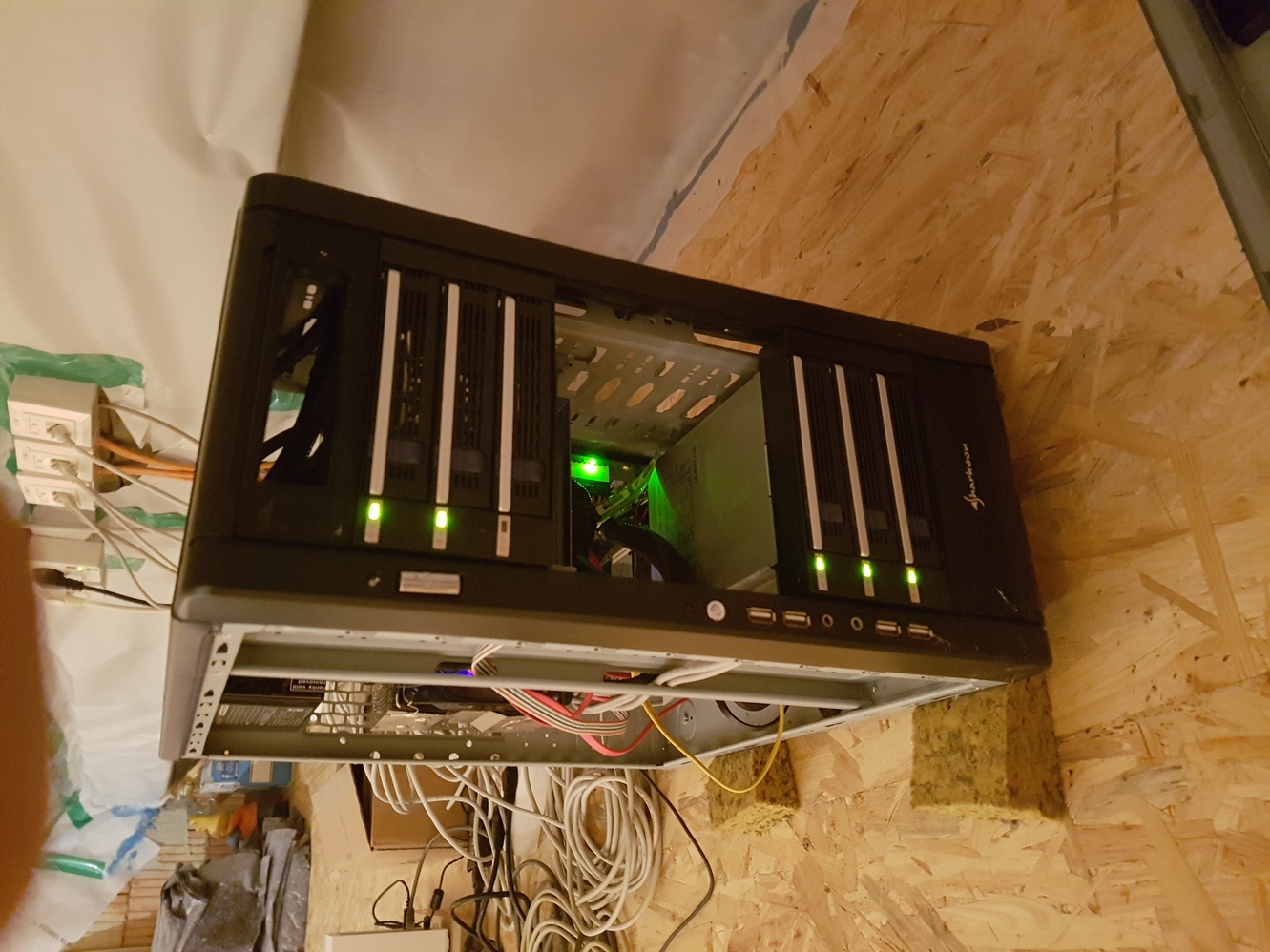 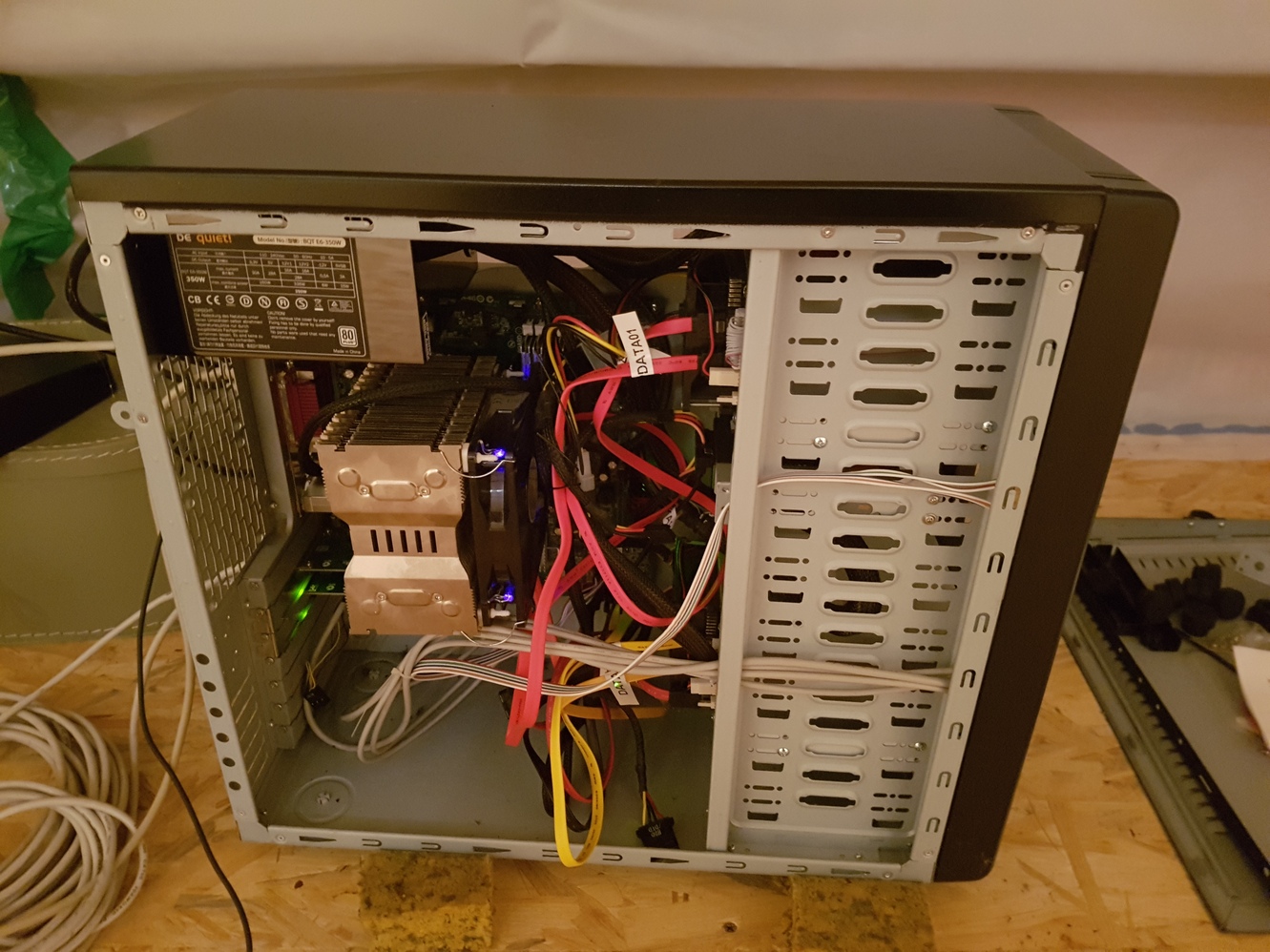 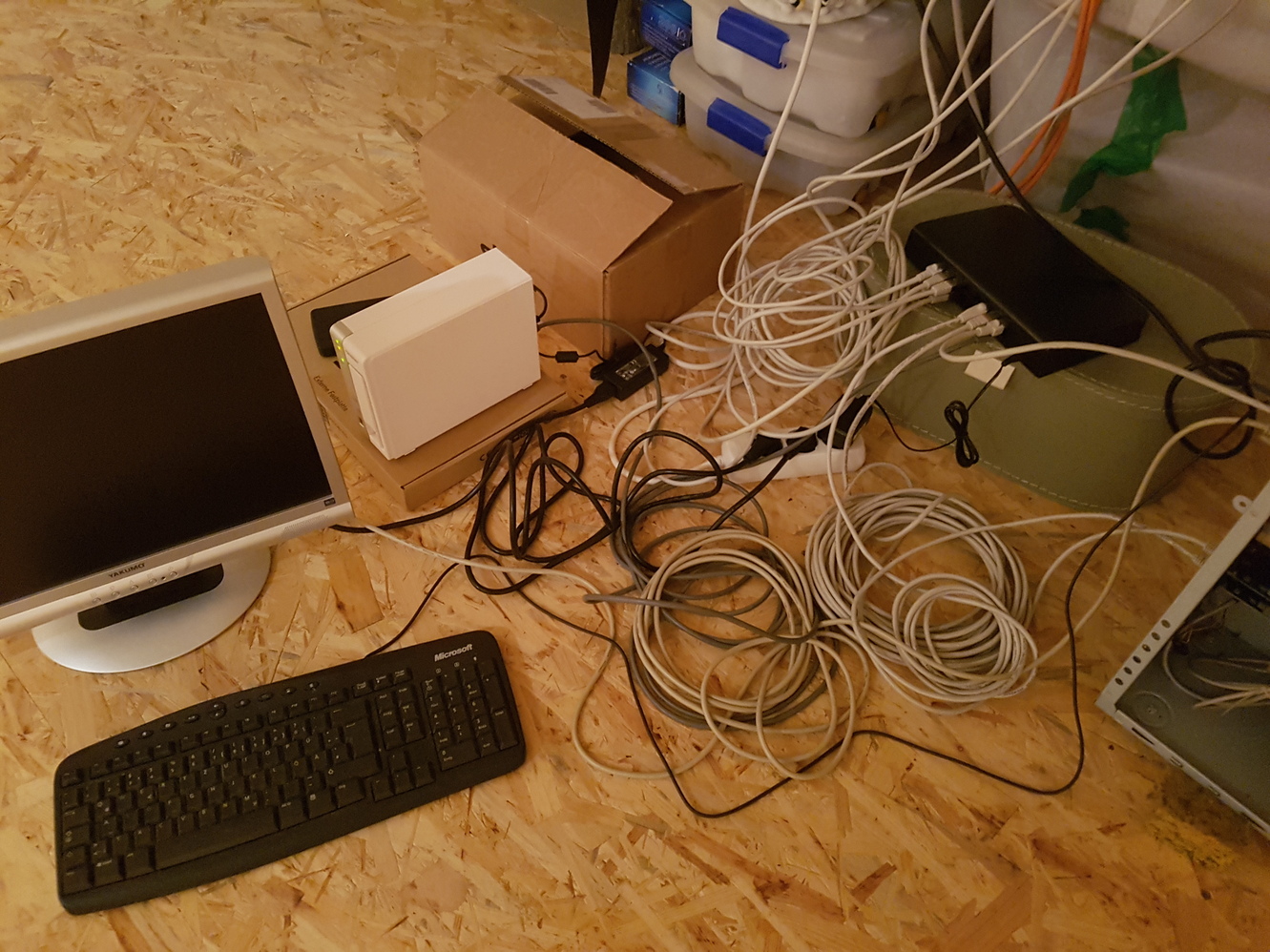